‘The Byzant Dominate was a small empire in pre-unification Terra situated next to the Achaemenid Empire, on the eastern edge of the Mediterranean Dust Bowl. Despite being a small empire, it had a formidable army, and waged several successful wars throughout its long existence. These wars won the Byzant Dominate prisoners, young children offered to the empire by defeated monarchs and tyrants as terms for peace. These children were raised by the Byzanters, indoctrinated into their cult and eventually joined the ranks of the emperor’s bodyguard: the Byzant Janizars.

Given the best equipment and training the Dominate could muster, these corps, or Orta, occupied a privileged position in Byzant culture and politics. Over time they had gained a reputation as king makers, famed for naming a new emperor and demanding vast sums from them; if they did not pay then the emperor was killed and a new ‘volunteer’ rose to the purple.

The Byzant Dominate, like the Achaemenid Empire, was incorporated by the Emperor in the early days of Unification. The Byzant emperor, Sul-Tac, was determined to resist the Emperor’s diplomatic envoys, believing him to be safe in his capital fortress, Byzant-Alpha. When the massed ranks of raging Thunder Warriors arrived at the fortress gates, the general of the Byzant Janizars, Madhvian, saw an opportunity for political advancement. He feared the enhanced warriors, whose reputation for the brutal massacre of any opposition preceded them. With the Janizars, Madhvian stormed Sul-Tac’s chambers and killed him along with his family. He then opened the gates of Byzant-Alpha, presented the head of Sul-Tac as a gift, and named the Emperor as the new Byzant emperor.

Upon hearing this, the Emperor accepted their declaration, becoming the ruler of Byzant and thus acquiring the empire without bloodshed. For their treachery against their former ruler though, the Emperor had the Ortas swear an oath of loyalty, that the Emperor was the last and only ruler they would ever follow and fight for. In order to seal this oath, whilst punishing them, the Emperor ordered the Janizars decimated. He also obliterated Madhvian with his psychic might.

The Janizars took their oath to heart, and fought in some of the bloodiest campaigns during Unification. The Janizars were allowed to take the noble children of defeated empires (often those preliminarily rejected from the Astartes project) and raise them in their tradition. With the influx of recruits the Byzant Janizars more than tripled in size, and several new Orta were raised, sent to fight alongside the legions in the great crusade. Thanks to their noble birth and early loyalty, they were attached to some of the more noble expedition fleets, most notably a large contingent fighting with Horus under Lord Commander Varvarus.’

This is the fluff I wrote to give a bit of a back story to the Byzant Janizars. I always liked the idea of the Byzant Janizars after reading a fan-made campaign pack about the Macharian Crusade. In it they were described as one of the Emperor’s household, so I reasoned they were likely to have been in the Great Crusade. Even though some sided with Horus in the books, surely there were some loyalist units as well? In the supplement it said how the Byzant Janizars were one of the few regiments to use a-grav vehicles so I was planning on continuing that theme, with land speeders as sentinels and eventually converting up some skimmer leman russes (note I won’t actually count them as skimmers, I just think it’ll look cool!!!)

Anyway, I eventually worked out the bits I wanted after struggling for a while, especially with regards to the distinctive Janissary hat. I settled on the mix of kits you see below, and am pretty happy with the result. Here is the first test model I made: 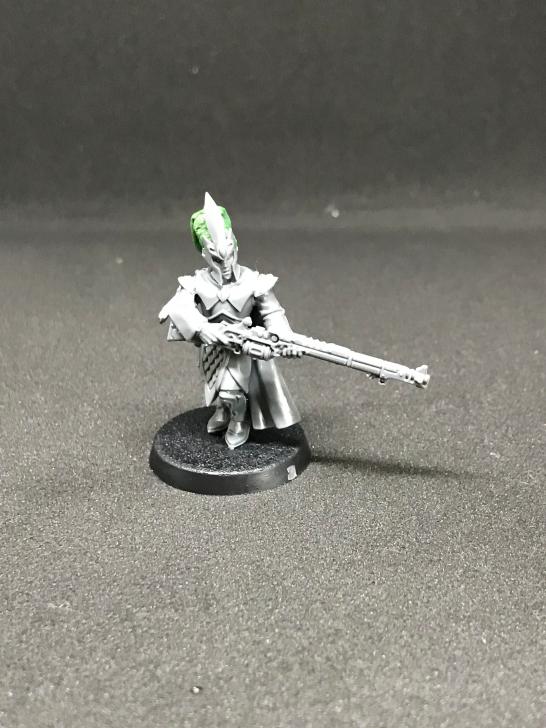 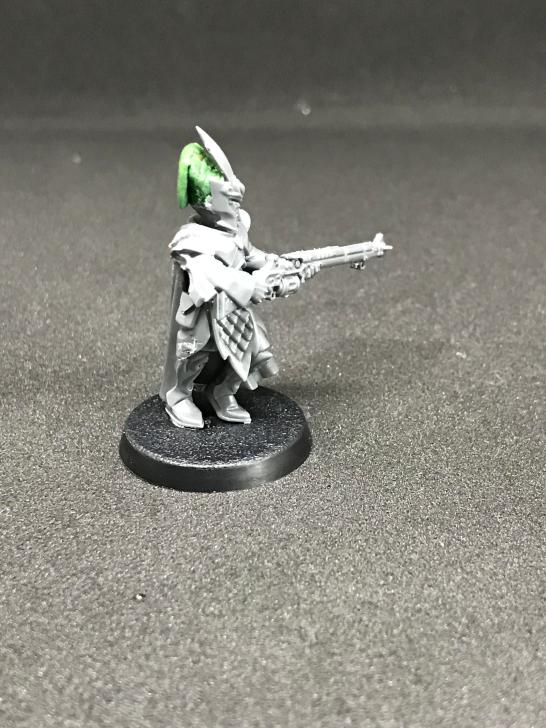 Their hats are greenstuffed on and I eventually shaved off the gems on their head and replaced them with aquillas to make them look more futuristic. 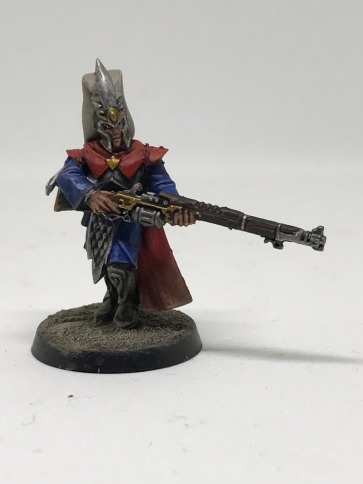 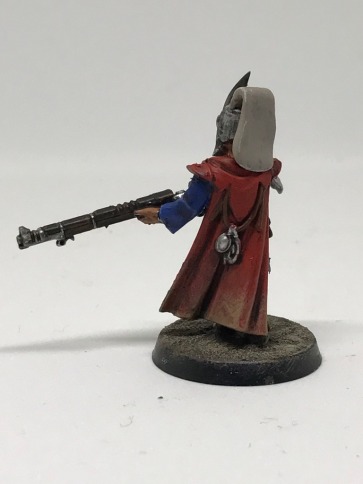 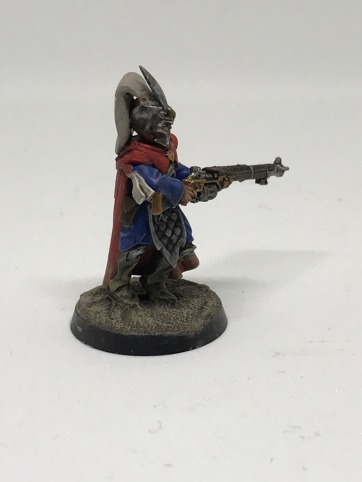 I was really happy with how he looked so started converting up the rest of the squad. This is the first militia squad, and needs to be bumped up to 20 men strong. I think the squad as a whole looks quite impressive! 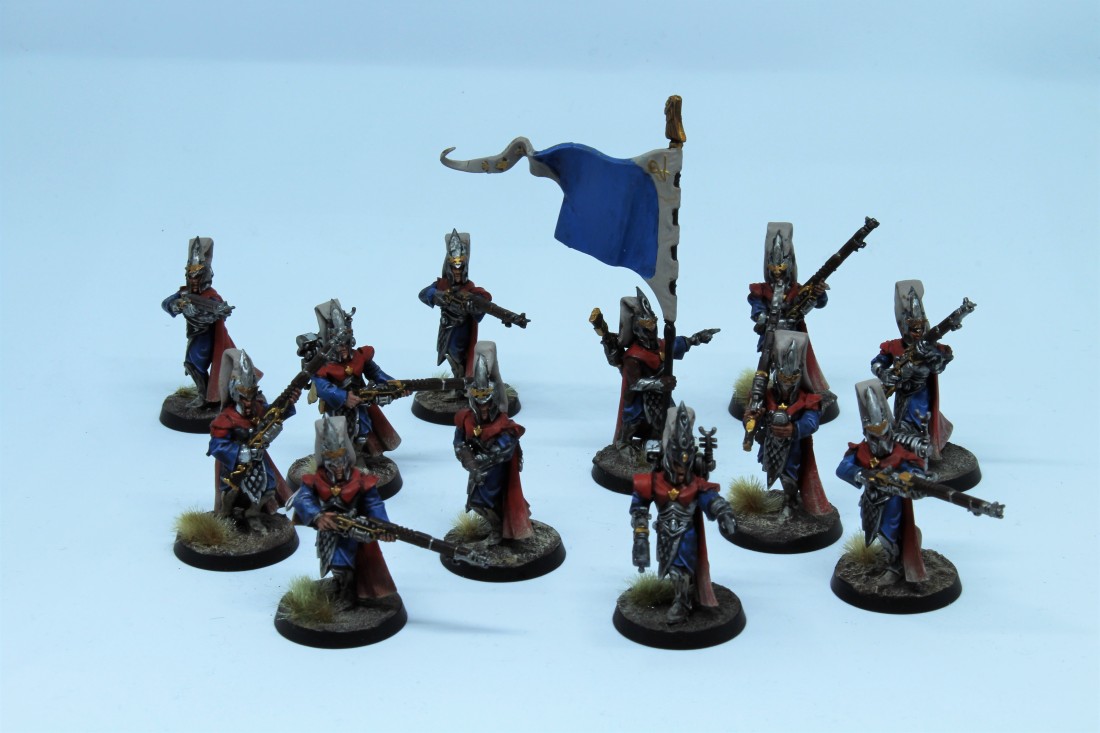 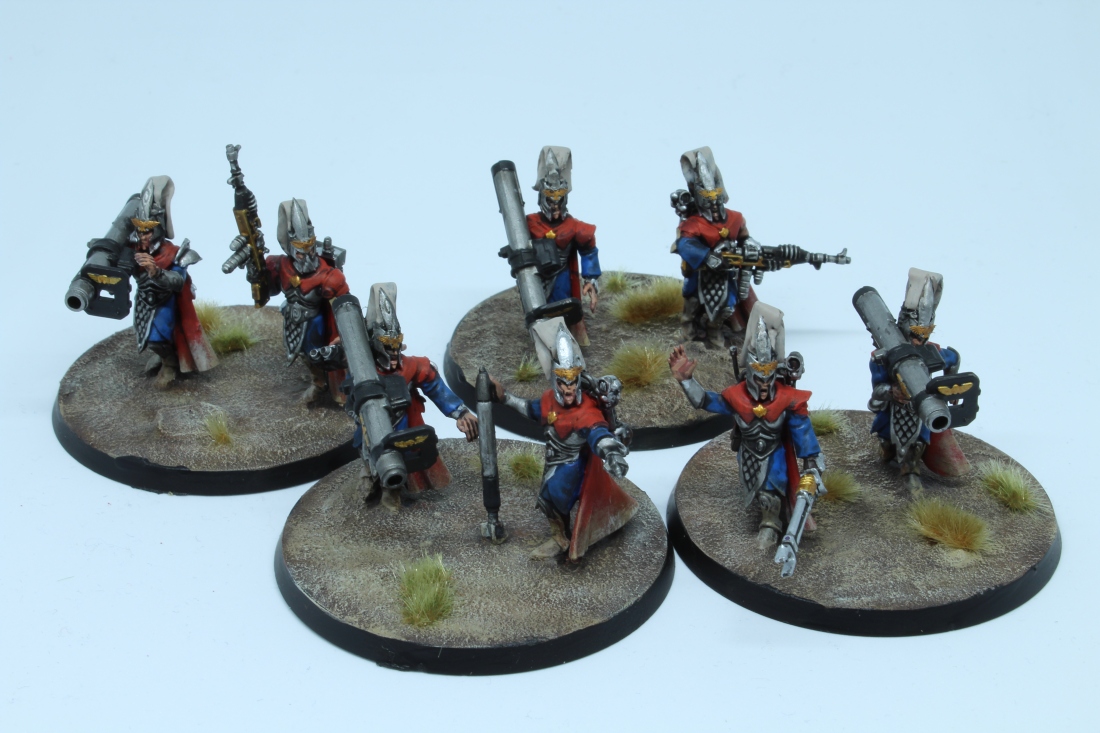 Finally I quickly painted up a force commander to use in smaller games so I could use the army as an allied detachment for my Emperor’s Children. He will eventually be the commander of the second militia squad but he works as my HQ for now. 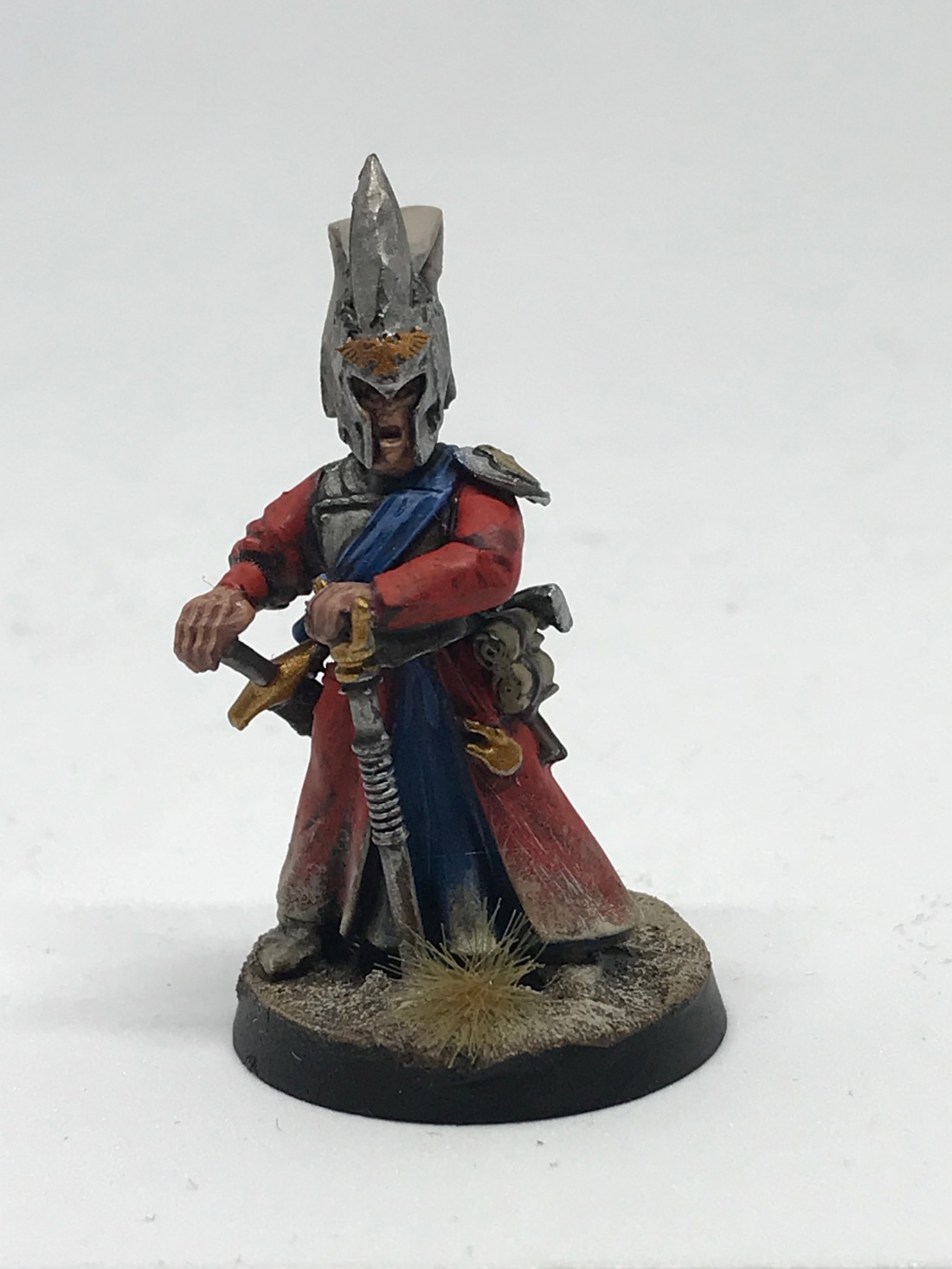 His pose is based of the Vostroyan command squad on the old Warhammer 40k Battle Missions book as I loved their static poses observing the battlefield rather than being stuck in the middle of the fighting. 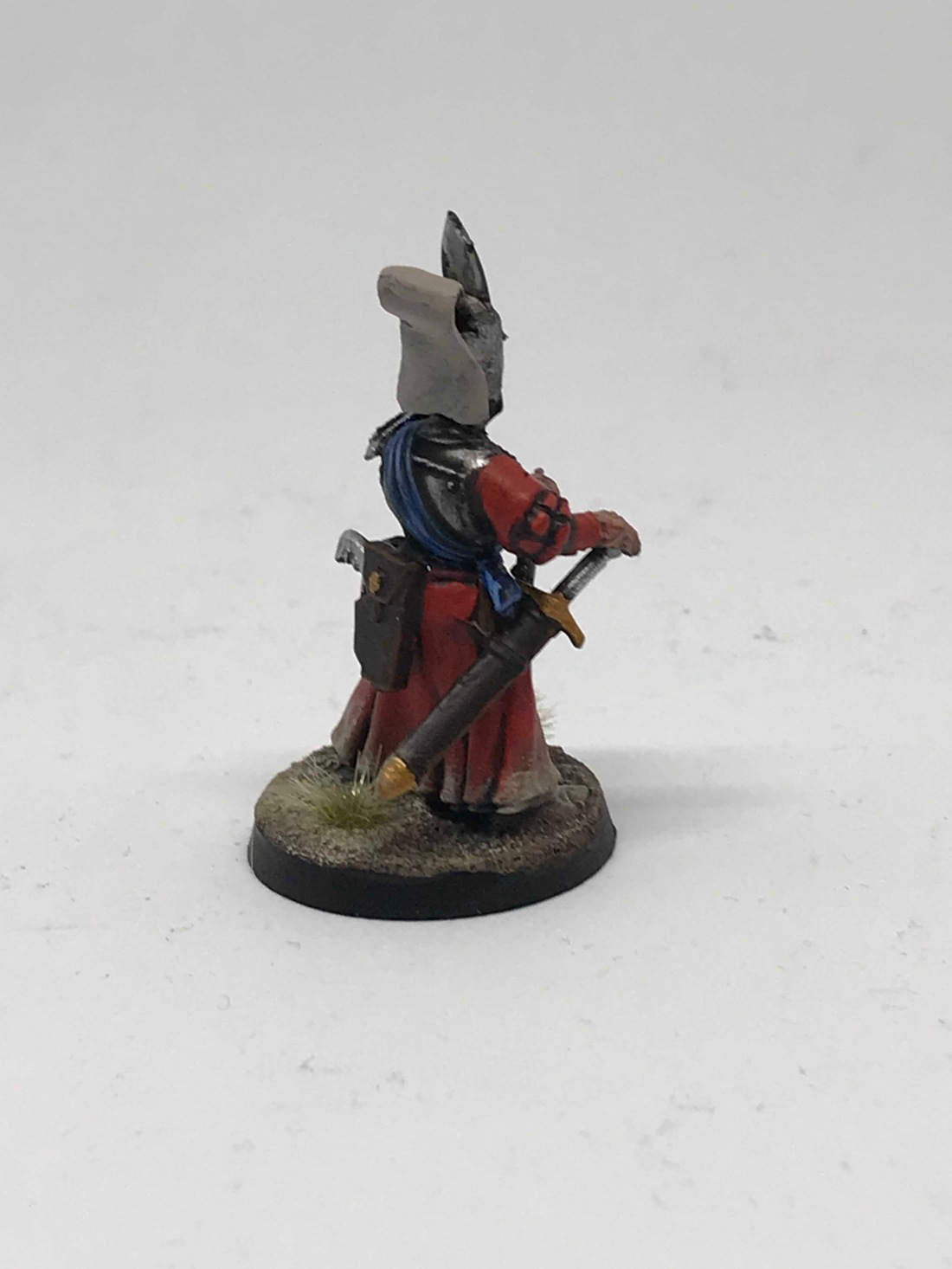 I have also finished the first of my land speeders which will be count as sentinels. The fluff reason behind this is that their empire was based on the edge of the Mediterranean Dust Bowl and so skimmer tech proved more useful at being able to patrol their territory than conventional walkers/vehicles. Its armed with an autocannon and I wanted it to look burdened with extra supplies and comms to show their use as logistics support for the infantry as well. 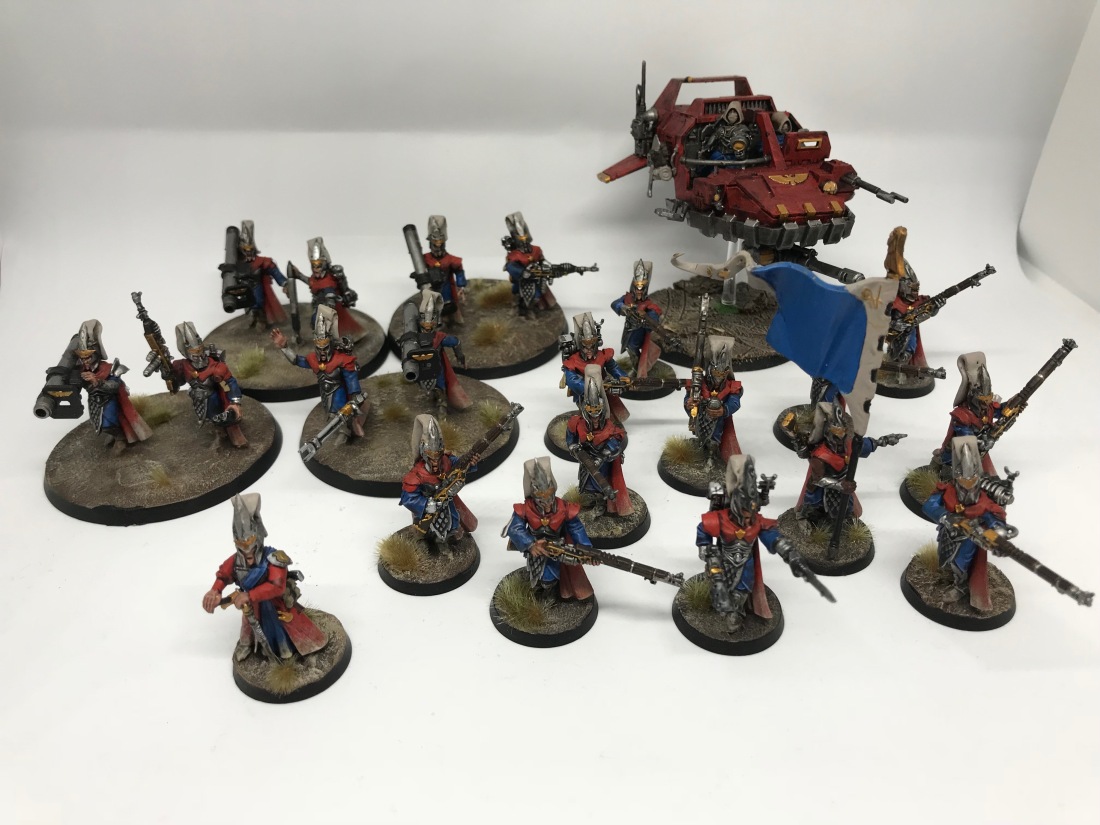 I’m really happy with how they’re coming along and how they look as a whole. Next on the list is the force commander and finishing these squads off. Then I’m looking forward to playing some games with these guys as an allied detachment. If you guys have any comments or ideas let us know.

Many witnessed Morgetheon's sermon condemning Volnoscere as a heretic.
Here's another Iron Guard for the #warofthefalseprimarch project, this time a squad sergeant with a beefed up hand flamer. Loving how brutal the death guard mk3 looks when it's de-nurglified!
Chaos ensued in the hours following Verashyon's invasion of Sanctram. Once thought to have been a keen ally in the defence of the Heliopolean diocese, the Arch-Cardinal was now inexplicably calling for Morgetheon's head.
"Liberator. Traitor. Apostate. Ecclesiarch. Morgetheon has been called all of these and countless others names. All have a measure of truth to them, yet none tell the whole story..."
"Most saw battle-brother Jakab's honour guard posting as a sign of Volnoscere's favour in Morgetheon and the Heliopolean Ecclesiarchy. Only a few saw what it really was - a promise of retribution should Morgetheon's loyalty waiver again..."
How would you take on this list? Here's 3k of Sky Hunter Phalanx #emperorschildren ready to run circles around you (in theory at least, last game I brought the list it got smashed 😂).