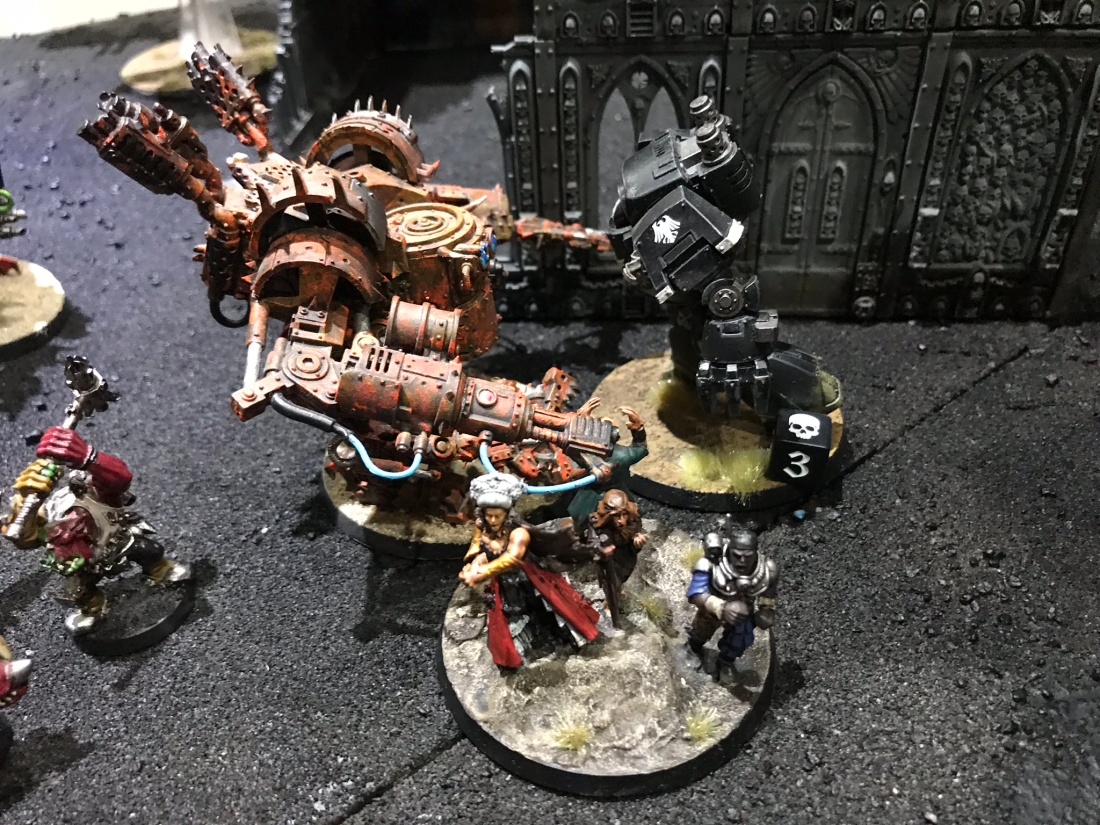 Originally designated 27-5, Krassis IV was the fifth planet that Corax’s 27th Expeditionary Fleet brought into compliance. Krassis IV was an old colony of humans, but was currently under the grip of a large ork empire led by ‘Gitstomp da Great’. He was using the humans as slaves to build greater weapons for his boys. 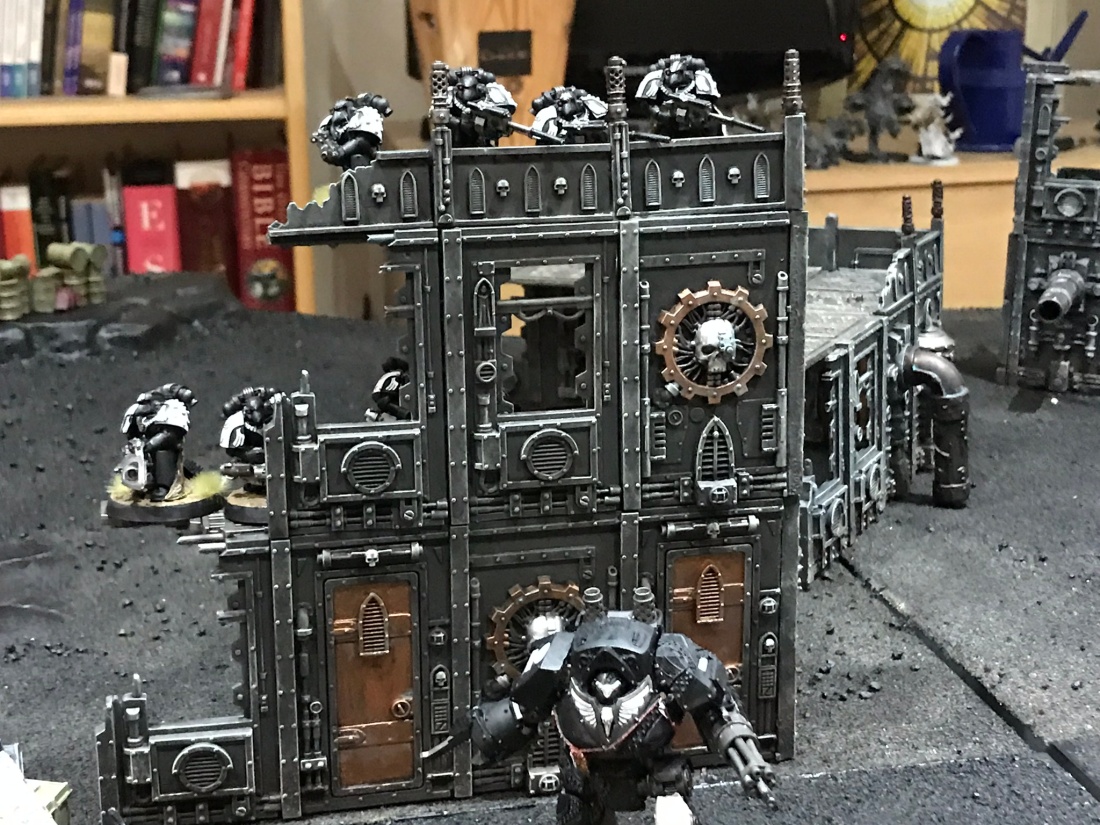 Upon arrival at the planet, Corax immediately dispatched units to the key population centres with the goal of liberating as many of the humans as they could. Chaplain Deythuri led the II Battalion, VII Chapter to the capital of the planet, landing an initial force of elite troops with the body of the battalion held in reserve in storm eagles. 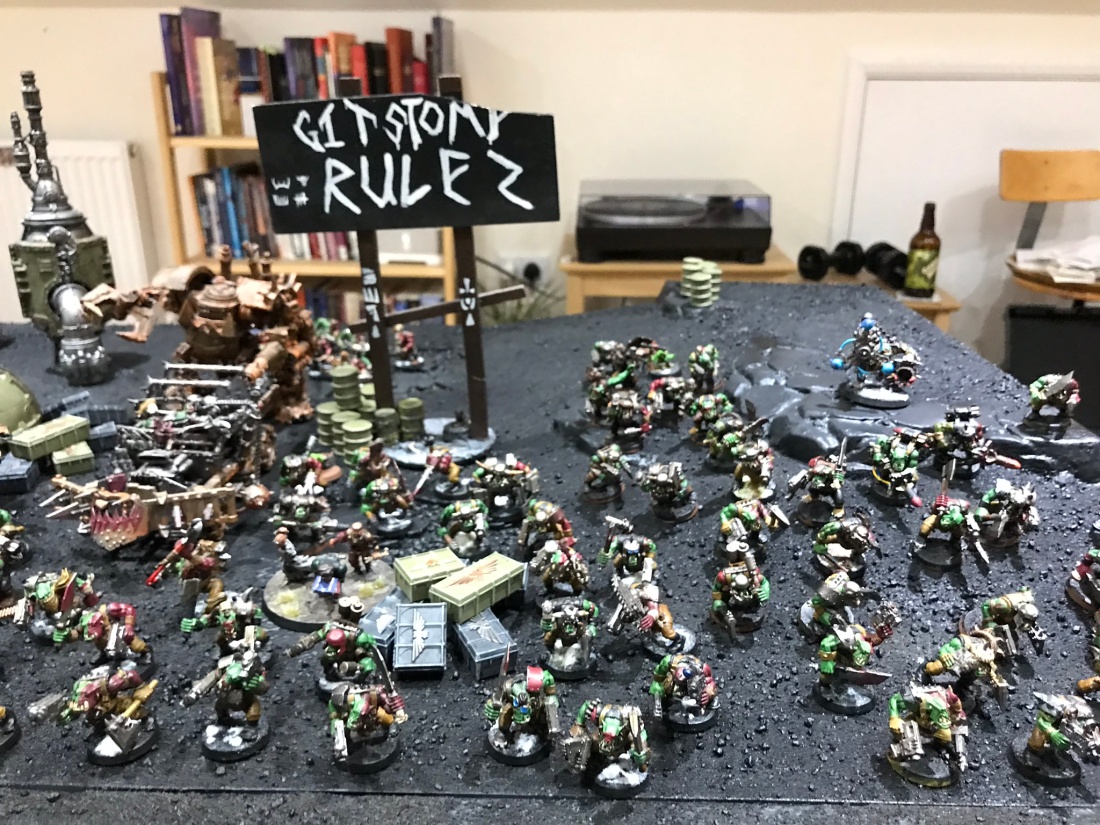 Before them was amassed a sea of green. Hundreds of boys backed up by mechanical monstrosities built in mockery of venerable and ancient dreadnoughts. This mass of Greenskins was a formidable sight and came on in large groups, hollering and firing their pistols into the air. 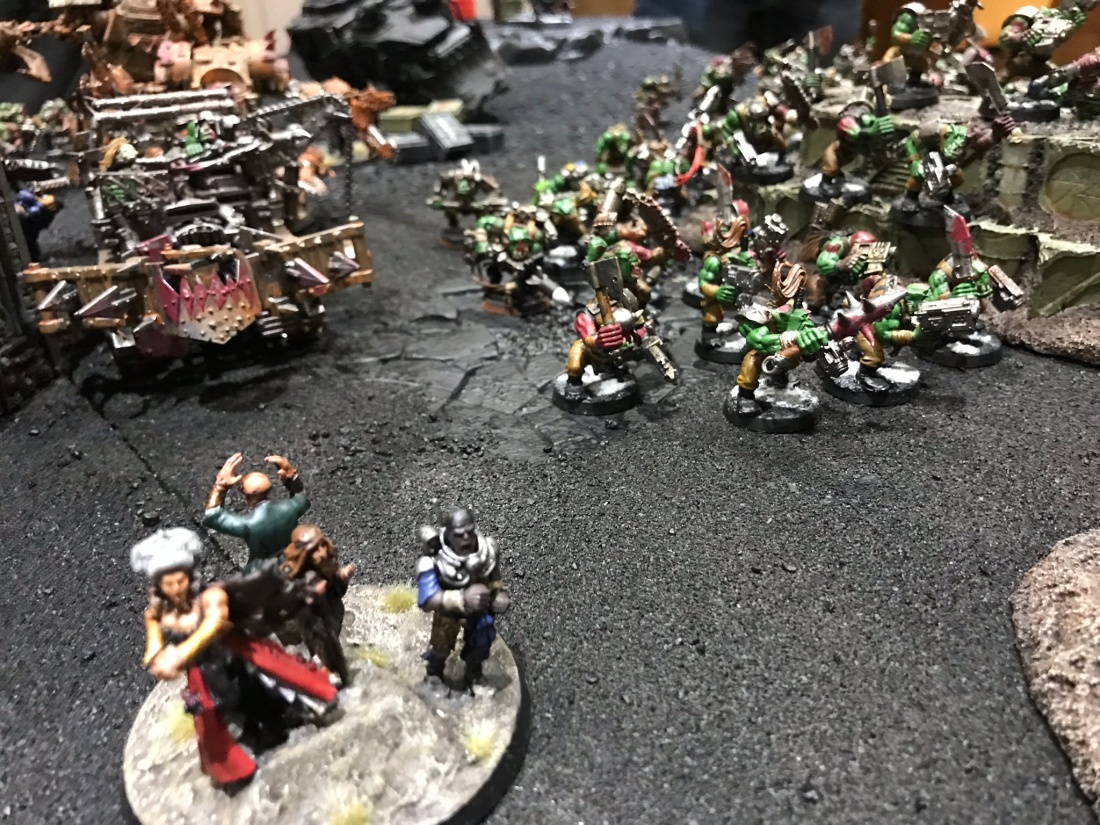 The groups of civilians in the area were the key targets for the Raven Guard, and they charged forward to meet the Greenskins in order to protect them. Initial gunfire from the Raven Guard was ineffective against the horde of boys, and venerable contemptor Kynaeus even lost an arm to the rocket fire of a tank-hunting mob riding in a collection of scrap metal that looked like some form of truck. 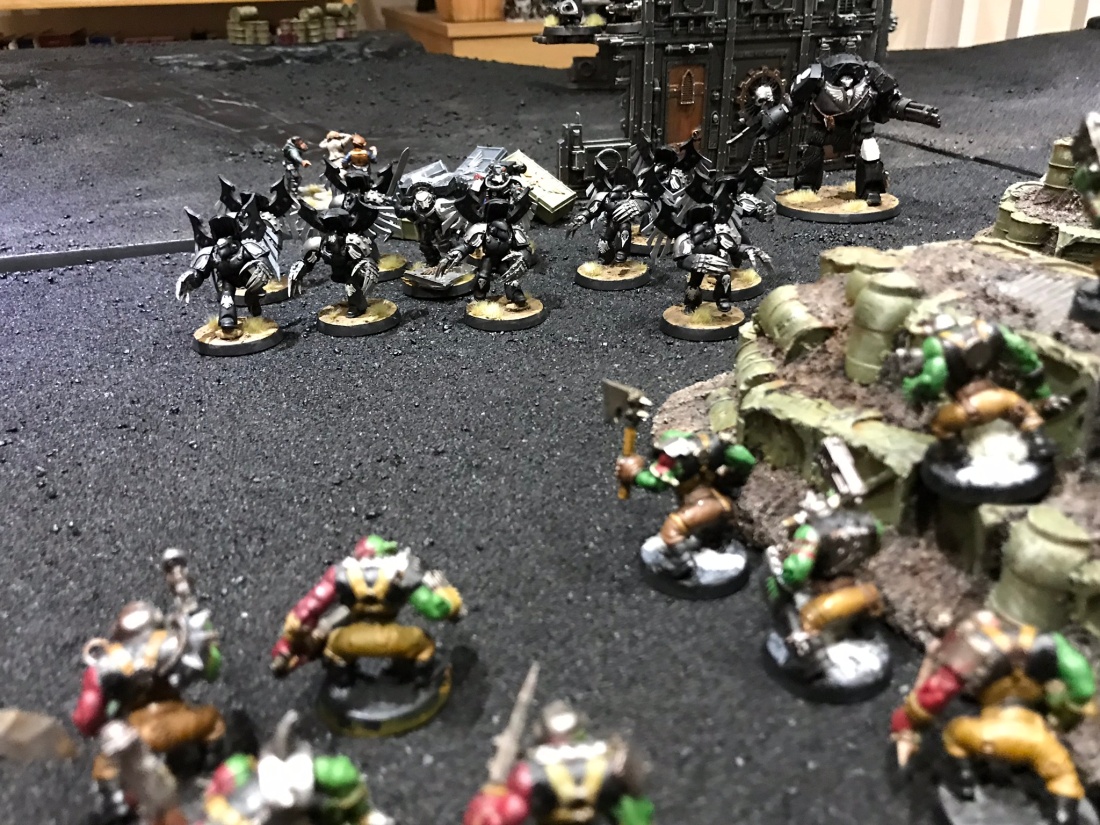 The Raven Guard were more than up to the task though, and Chaplain Deythuri burst forward with the Dark Furies, counter-charging the bellowing mobs of boyz. Their ravens talons struck with bloody effect, and whole squads disappeared under their shredding claws. It was at this point that a gigantic ork stepped out from his battlewagon, accompanied by a unit of huge, scarred nobz. They charged Deythuri, butchering his squad and leaving Deythuri broken on the ground in his wake, not before they had killed a number of the nobz though. 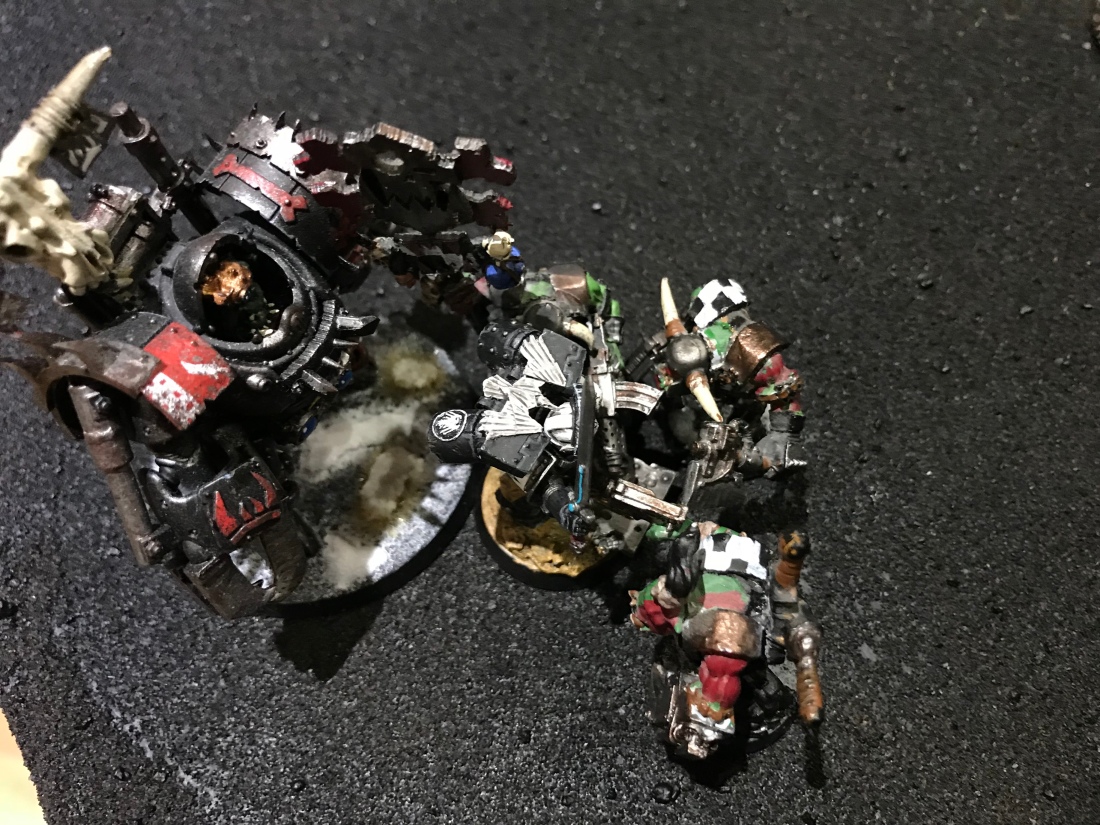 Corax realised that this ork must be Gitstomp, the leader of the Greenskins on this planet, and immediately teleported down from his capital ship, Shadow of the Emperor, to face this evil and cut the head off the snake. Gitstomp could not match the fury of a primarch and Corax shredded Gitstomp, ending his live in a staggering series of blows with his talons. 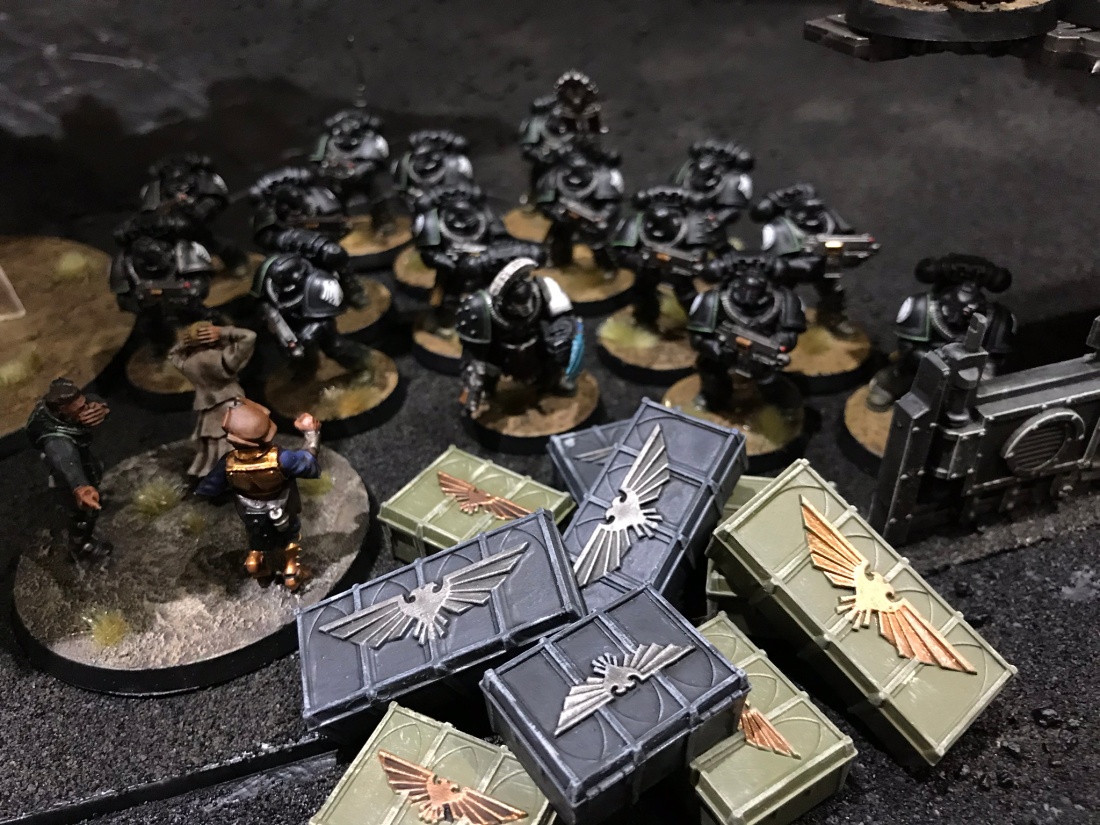 More marines arrived to secure the battlefield and help protect the humans. Not even the arrival of a strike wing of ork fliers could stop the Raven Guard from cleansing this city. With the Warlord dead, the ork resistance collapsed, and Krassis IV was finally free of the ork masters. The Raven Guard spent 2 weeks clearing out the orks from the hidden corners of the world, ensuring that the Greenskins would never again threaten this planet. 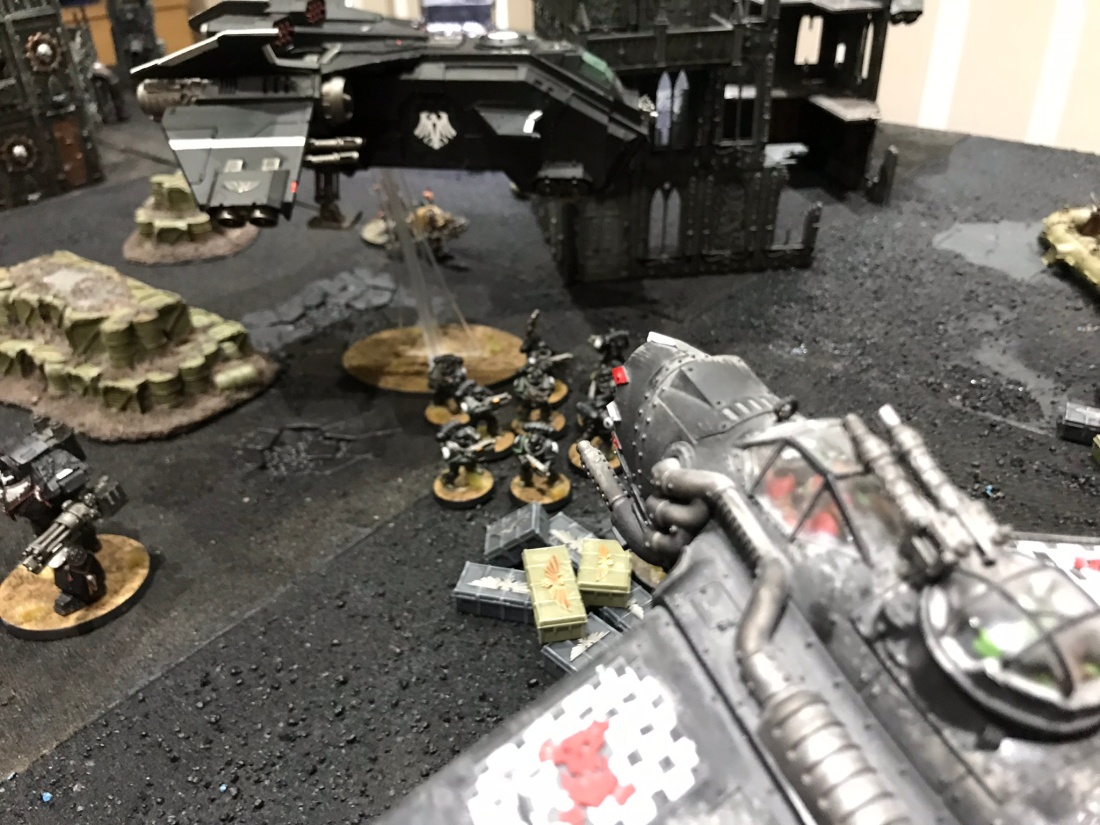 In preparation for the Great Crusade event we are playing at, we thought it was a good idea to get a couple of games in to see how orks did against legions. We played War of Lies, and having so many troops was pretty useful for the orks as it meant they had better ground cover than the Raven Guard. However, the firepower that legions can put out is just devastating, and they chew through orks like they’re nothing. Walkers also suffer with low initiative; contemptors strike before deff dreads and are well equipped to punch them to death! The final result was 14-10 to the Raven Guard. It was a really fun game, and nice to try something different in Heresy. I’ve learned some lessons though, and reckon I’ll get a few more bits for my orks to try a different style of list. Watch this space…