Happy New Year everyone! Here’s a write up of a couple of battles we fought last week. I hope you enjoy!

Kardiv Prime had escaped the worst of the Heresy so far. It was protected with a chain of fortresses around the main hive built by the IV Legion and garrisoned by well drilled army troops. It didn’t possess any great wealth or strategic importance and had hoped the heresy would pass them by. When Corax’s fleet appeared at the edge of the system the garrison at Ga-Phe was put on full alert and requests for aid were sent out to any available traitor forces. It was a surprise to everyone that the Raven Guard didn’t attempt to take the main hive but rather landed in the northern polar ice fields, ignoring all population centres. Old cartographs showed a small research facility there but nothing else. Shortly afterwards, the XXII Millennial of the Emperor’s Children arrived and went straight to the polar caps to confront the Raven Guard.

An initial scouting force was sent under the command of Hipparch Anthame to locate the Raven Guard forces. The skimmers scouted far ahead of the rest of the task force, and operated as a reserve for the infantry. 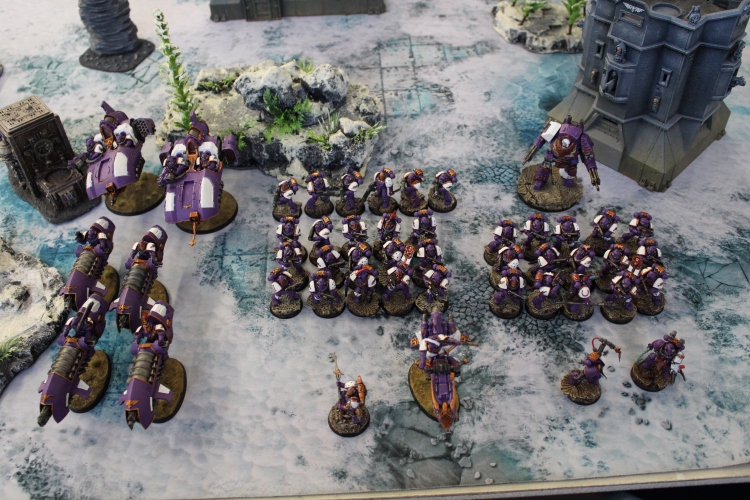 They quickly realised they had walked into an ambush set up by Shadow Captain Kraai, who had assembled units of elite troops to delay the Emperor’s Children. 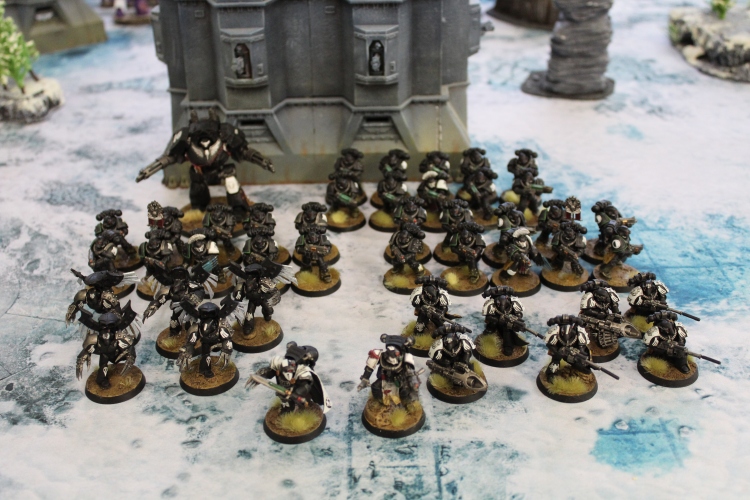 With his troops deployed either side of the ravine, Kraai had waited for Anthame’s forces to march through the pass before launching their attack. Swift and deadly the tactical marines opened fire, pinning the Emperor’s Children infantry whilst the Dark Furies bounded down into the pass. Brother Kyaneus opened up with his kheres at the back of Honoured Brother Aristogeitus and destroyed the contemptor with one burst of fire.

The Mor Deythan suffered heavy casualties under the firepower of the Emperor’s Children support squad positioned in the bastion; even their ability to blend into their cover couldn’t protect them from the martian death rays.

The Raven Guard had the upper hand in the fire fight until the skimmers returned to the battlefield. They arrived right behind the Raven Guard lines, crippling Brother Kynaeus with a sustained missile barrage from the Javelins. 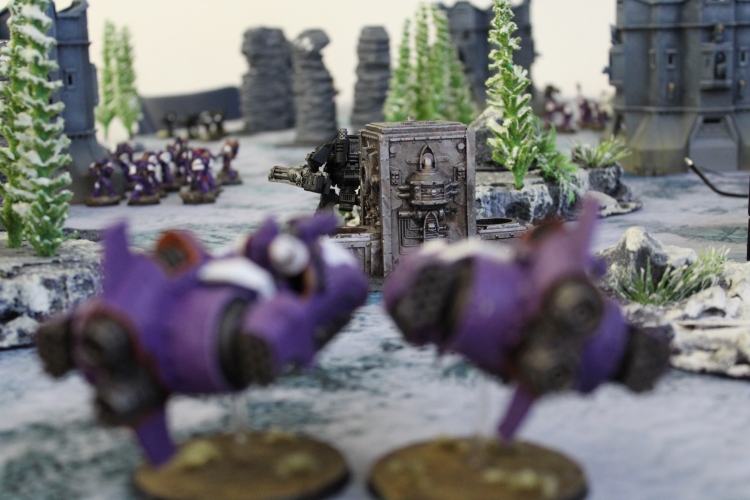 Nothing could stop the Raven Guard plasma gun support squad, who chewed through every unit they came up against. The jetbikes were annihilated by white hot bursts of plasma. 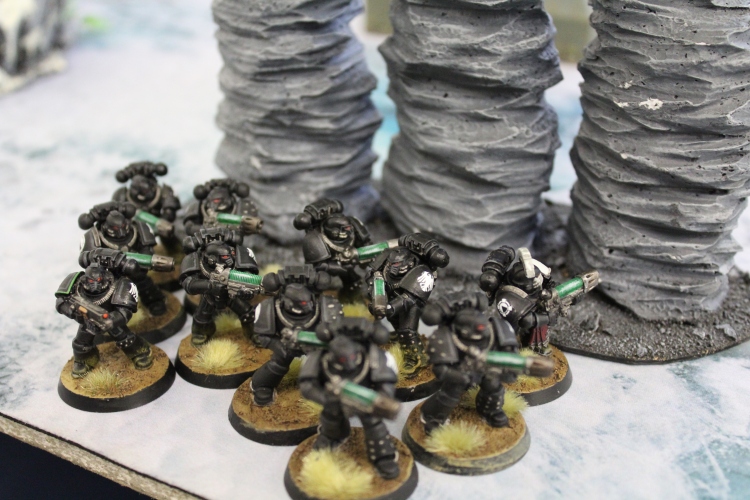 The Dark Furies made it into combat with the tactical squad to the west of the pass and Shadow Captain Kraai butchered Sergeant Iosephon in personal combat. The rest of the squad quickly died to the claws of the Raven Guard.

The Tyrannicide, the Emperor’s Children Glaive, took a heavy toll on the Raven Guard. It decimated the assault squad, Dark Furies and Mor Deythan with its Volkite Carronade. In response a Darkwing storm eagle flew in, dropping off a squad of terminators. They set to work with their chainfists and crippled the venerable super-heavy, knocking it out of the battle.

Corax’s personal appearance on the battlefield helped rally the Raven Guard, and he set about butchering squads of Emperor’s Children. Lord Legate Antigonus, seeing the primarch and looking for a rematch of their duel on Istvaan V, charged in with his bodyguard. Several members of his Phoenix Guard were cut down by Corax, but even he could not withstand the blows forever and was eventually forced to retreat from the battlefield.

Even though the Raven Guard were outnumbered they fought valiantly. They had managed to delay the advance of the Emperor’s Children long enough for a shuttle to be launched from the research facility. Squads of Raven Guard gave their lives as a rear guard to allow the rest of the XIX legion troops to flee the world. Antigonus could only look on in fury at being denied this chance to destroy the Raven Guard completely and he was left to wonder what it was that the Raven Guard had fought so determinedly to extract from the planet.

The research facility held no clues as to what had been taken, only that it had required a large complex of geothermal generators to run. If this was something that could help the loyalists in their fight against the Warmaster’s cause, then Antigonus would need to stop them. The XXII Millennial relocated back to their cruiser and set off in pursuit of the Raven Guard, determined to stop whatever their plans were…

One thought on “Dicing with Death – Clash on Kardiv Prime”