Hi everyone! A while back we said we were going to link some of our games together into a campaign to raise the narrative levels of our games. Well we have finally done so! We present to you War Zone: Ieriche

This campaign uses the rules from black book 4, we are using 4 strategic objectives and have 4 reserve points each (so the campaign will run for a total of 8 games). The rules are really simple to use and are great for adding a little extra detail to our games. The whole war zone has the Ferocious Storms special rule whilst each of the strategic objectives have additional rules. There is a risk of going over the top with these rules, so we have been careful to keep the extra stuff to a minimum. If this campaign goes well, we’re considering running one with our gaming group so fingers crossed! 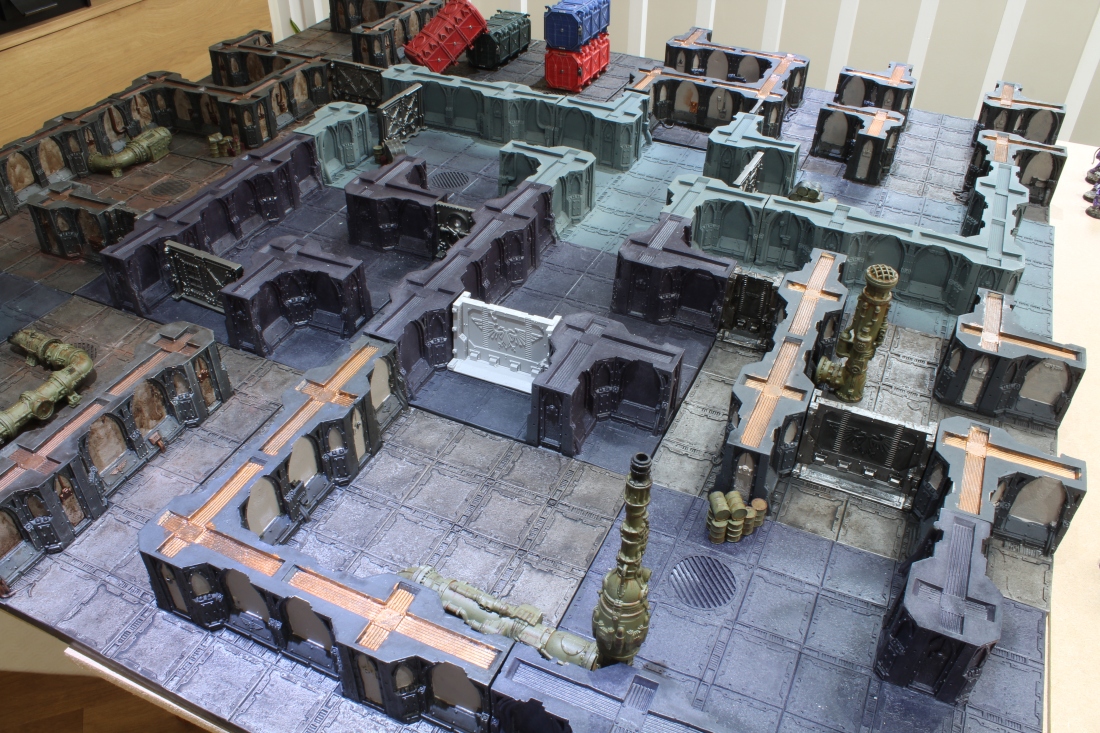 (the tiles are currently wip but we were too excited not to play a game on them!)

On Saturday we played our first game; the Raven Guard won the roll off and chose to fight on Orbital Station Alpha-Alpha 0001. This station was named when the planetary governor was so sure of Ieriche’s post-compliance prosperity that he believed they would need vast numbers of orbital stations and defence platforms. Sadly Ieriche’s history didn’t prove him right, and Alpha-Alpha 0001 was the only station every built. We decided to play 1,500 points of ZM plus a primarch. Here are our armies: 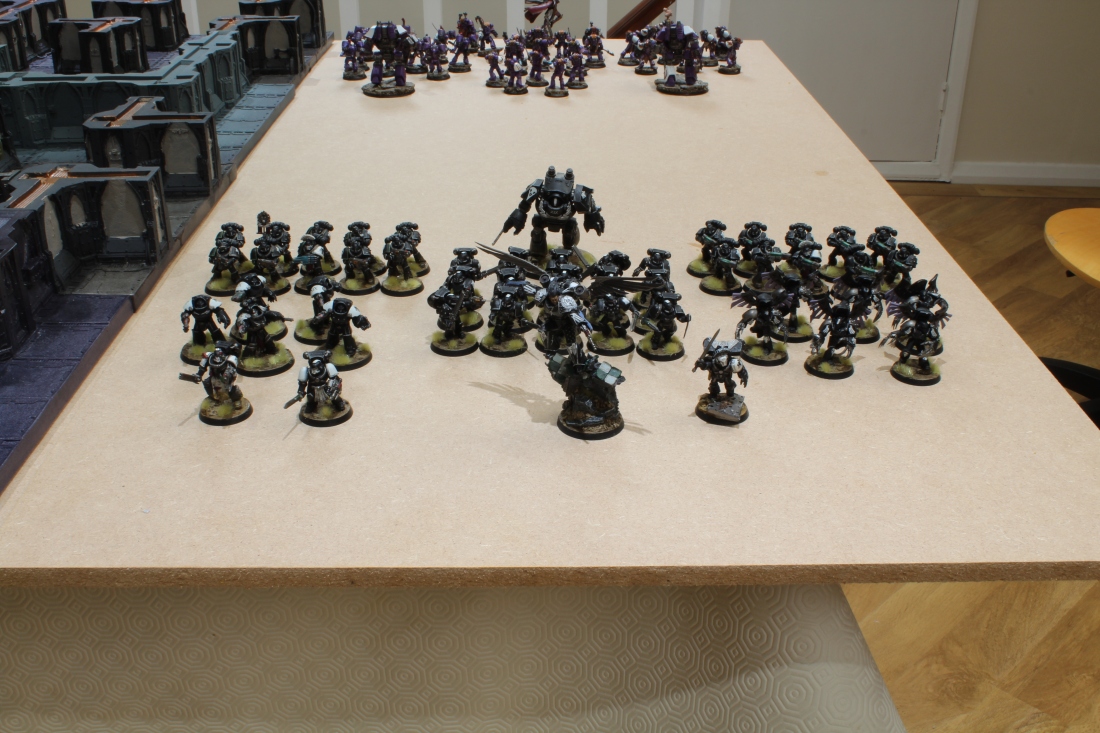 It was a very intense game, with the Raven Guard choosing to deploy right next to the Emperor’s Children. 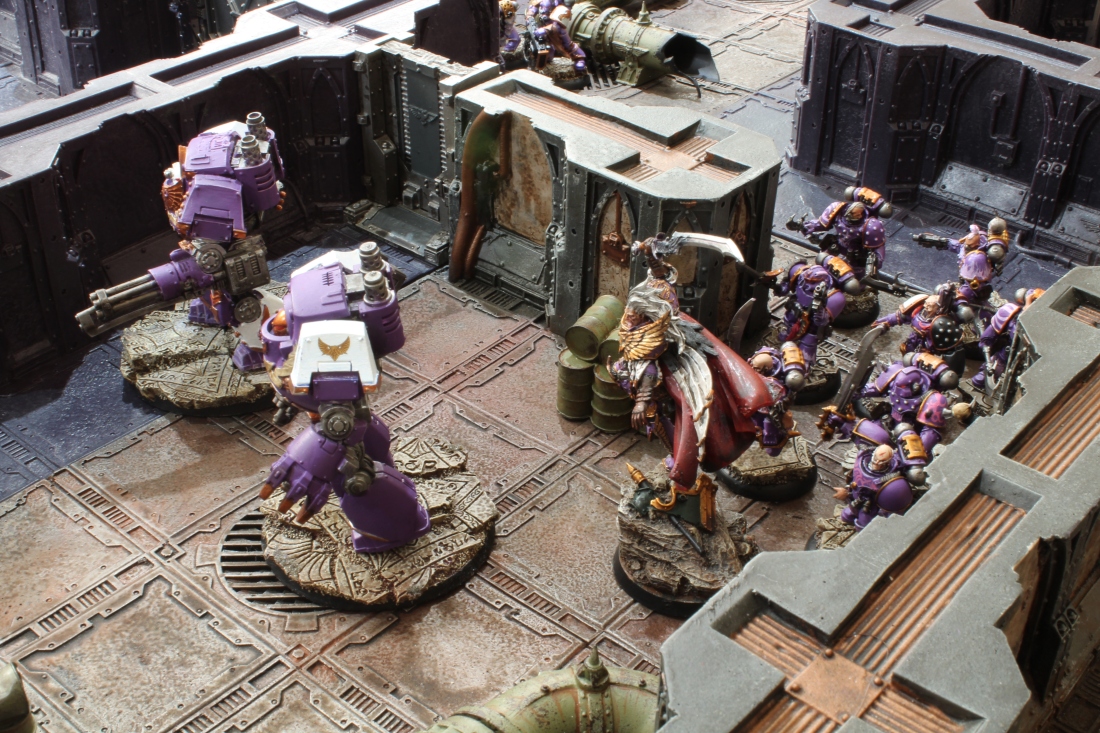 The Emperor’s Children had the first turn, and seized on the opportunity, rushing ahead with all speed whilst the two Contemptors took out the nearby doors. Corax jumped ahead of his men, keen to engage the dreadnoughts and tie them up, blocking the corridor for Fulgrim and his accompanying band of psychopaths. He failed his charge however, leaving him out in the open and in charging distance of he Phoenician. Few palatine blades could make it into the combat but it did not matter as in a single round Fulgrim brought Corax down to 1 wound. 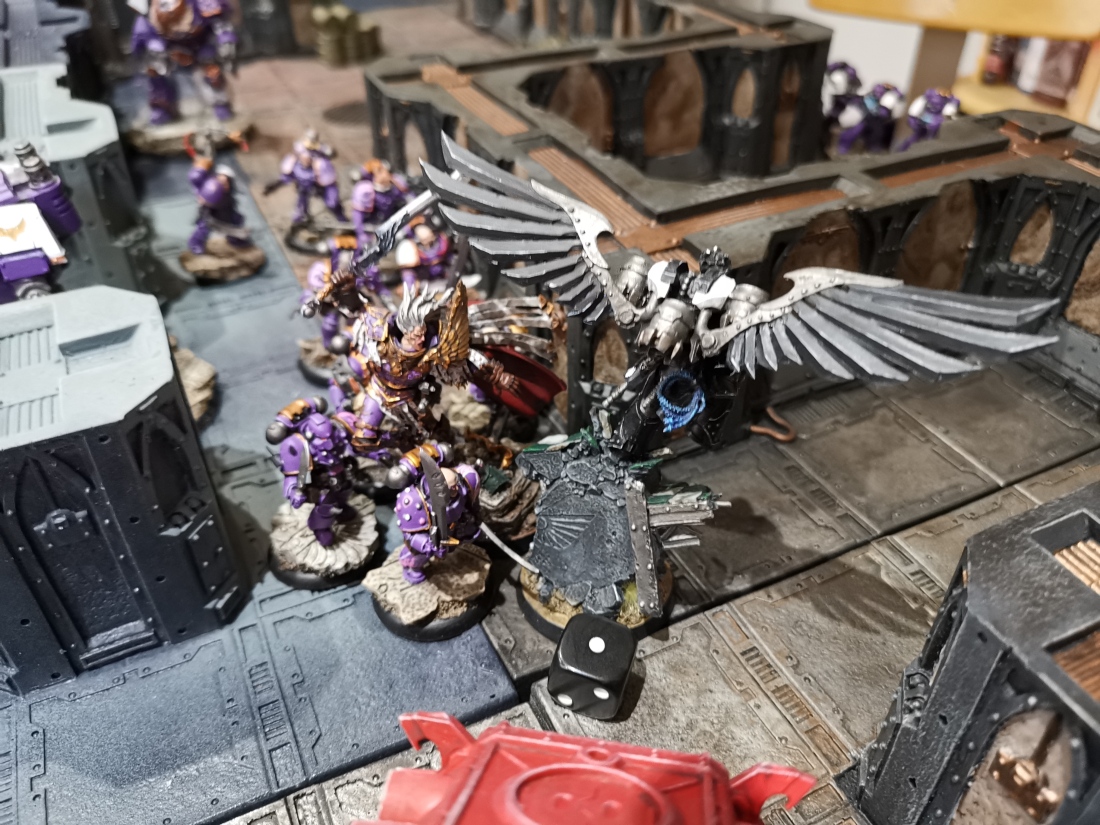 Corax fled the combat and charged in with his dark furies, but they were unable to dent the artificer armour of the palatine blades and were butchered in return.

With the main combat units of the Raven Guard destroyed all was lost for the loyalists, who were forced to withdraw and cede control of the orbital station to the sons of the Phoenician. Round one of the battle for Ieriche went to the traitors.

It was a really fun game even if the Raven Guard did end up getting tabled, things could have gone very differently if Corax had got his charge off turn one! This was only round one of eight in this campaign so keep an eye out for more games on the horizon.

Ieriche will fall, it just remains to be seen who will be left standing on its ashes…

(the image of the planet is edited from a screenshot taken whilst exploring the Space Engine program, for personal use in this campaign only. See http://spaceengine.org/ )

Iconolate Third-Class Maolruibh is battle-choir Theta's heavy, and wields his hot-shot volleygun with deadly effect. A new weapon in the Imperium's arsenal, patronage of the Ecclesiarchy has ensured that the Scions have access to the best equipment possible.
"The Ecclesiarchy says it raises the Imperium's orphans to be good servants of the God-Emperor which may be true, but the Schola Progenium sure has a lot of firing ranges for a school of monks and nuns..."
This pict-recording shows Iconolates First-Class Faolan and Seòras of the Tempestus Scions, Chalcean Battle-Monastery. Located on Andrea Prime, a cardinal world and centre of the Imperial Cult for the sub-sector, the Chalcean Battle-Monastery has trained Scions for over a millennia. Its sons and daughters have fought for the Ecclesiarch on countless worlds, driving back the mutant, heretic and alien wherever needed.
Whilst I continue to work on my land speeders for the #byzantjanizars I thought I would show off the lascannon support squad I finished rebasing a couple of weeks ago.
007.M31 - Drogar IV's abundance of promethium made it a vital link in the traitor's supply chain. Garrisoned by an Iron Warriors company, it presented a difficult obstacle for the loyalists. The Byzant Janizars underwent a four month campaign, relying on their concentrated heavy weapon squads to deal with the Iron warrior's armour whilst the infantry captured the promethium fields.
"Behold! The faces of those who stand with the false-prophet!