Whilst the other two have been busy with real life, I have been swept up in Heresy enthusiasm and have converted up some models for my planned mid-heresy army. With some reshuffling in the Raven Guard list, the destroyers got dropped as they tended to under perform and didn’t really fit with the theme of the army.

So with the destroyers as a base I set up converting up the squad of palatine blades including the characters mentioned in the last post. For this build I mainly used the Chaos Raptors, the Dark Eldar Hellions and bits from our extensive bits boxes. First up is Kalimos: 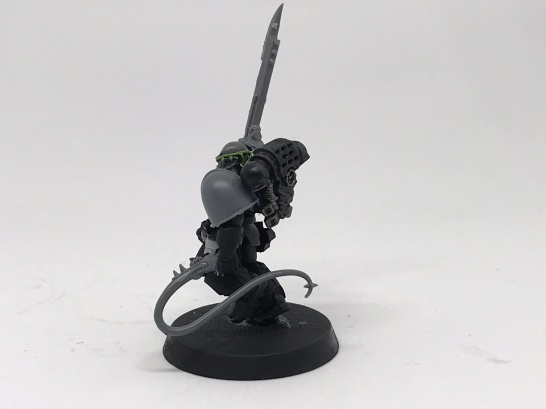 He has the power sword from the Raptor kit plus a head and whip from the Hellions. I shaved down the ears of the head to make them a little less alien, then green stuffed some ‘chains’ and hooks around the face to represent his mutilation. I’ll paint the skin on his face all red and cut up; hopefully it’ll look good!

This is my interpretation of Lonomia Ruen. One knife comes from the Hellion kit and the other is just a spare dagger/spike I had lying around that looked suitably wicked. I added a few spikes to his shoulder pads and I think it looks good without being too over the top.

Here is Bastarnae Abranxe. One sword is from Lucius the Eternal that I’ve had lying around for ages but not actually done anything with and the other is from the Mk 4 power weapon kit. The scar and tattoo on his face will be done with paint. 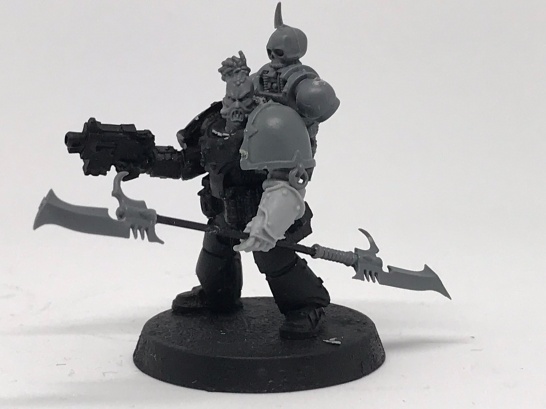 Here are Basileon and Andragoras. These made up guys are equipped with phoenix spears made from the blades in the Hellion kit. I figured they looked close enough to phoenix spears with an added evil look to them. Both of them have heads from the Hellion kit; the hair looks nice and psychedelic and they have masks that represent the surgical upgrades given them sonic shriekers. I was worried that the heads look a bit too small, but overall I’m fairly happy with these guys.

And the final two are Diodotus Sidon and Laenas Apameon. These guys are also armed with ‘phoenix spears’ (I realise that Laenas’ is quite bent, it has since been straightened out) and have heads from the Raptor kit. Several of the helmets have extended face plates that are perfect to represent sonic shriekers.

And here is the whole squad. I’m really happy with how they look overall. Their armour is still clearly mk.4, but they also very much look like traitors. They’re also more in line with how they are represented in Angel Exterminatus. I’ll do another post once they are fully painted; I’m going with the same scheme as my other Emperor’s Children, just with extra flourishes on them.

As ever if you have any comments or criticisms of them please let me know!